The Most Ambitious Rain Water Harvesting System in Milwaukee 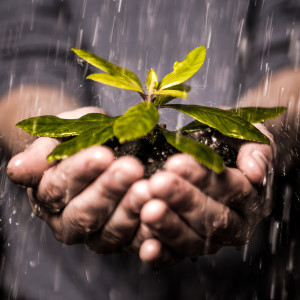 Rain water harvesting is a great way to save some money on the portion of your water bill that you typically use on your landscaping. Most people just attach a barrel to their downspout and enjoy what they can get.

But one Milwaukee couple has taken a much larger step. The Bay View Compass recently reported on their immense, one of a kind 750-gallon system. We wanted to share it with you simply because we thought it might help inspire you to try some kind of system in your yard.

“One barrel will fill up in about 10 minutes of a gentle rain. The five-barrel system will fill up in about half an hour or so…and you just start having water coming out of the top of them, and it’s a very bad situation,” said Pampel. The five barrels stood on a brick-paved patio behind their house and became problematic when the full-barrels’ weight depressed the concrete pad at the base of the house. Water collected in the depression during storms, Pampel said, which damaged the home’s foundation and created water seepage issues. After talking with John LaPointe of Greener Roofs and Gardens, Pampel and Schmeling decided to ditch the barrels and install a 750-gallon underground Aquascape rainwater-collection system (or graywater system) in their backyard at 517 E. Dover St.

The system, similar to one at Boerner Botanical Gardens in Hales Corners, would be the first of its kind installed on residential property in the Milwaukee, according to Pampel. LaPointe had installed the systems on residential properties in other areas of Wisconsin, including a 2,200-gallon system in Stevens Point, and smaller ones in other parts of the state, but none in Milwaukee.

The Aquascape system is connected to rain gutters on the back of the couple’s house, just as the rain barrels were. But now the water is transported away from the foundation.

Filters in the downspouts remove twigs and other debris from the rainwater before it flows to underground drain tiles (4-inch diameter) that transport the water to an underground reservoir.

What do you think of this kind of system? It’s certainly sustainable, though it requires an awful lot of landscaping work! Would you put one in your home? Like most of the country Milwaukee does have a storm water runoff problem, and you’d certainly save a ton of money on the water bill.

We install fences, gazebos, and pergolas in Mequon, Menomonee Falls and the rest of the Milwaukee metro area. Call us today for a free estimate on your new fence!

OUR FENCES LAST LONGER BECAUSE WE MILL OUR OWN WOOD!

Our milled boards are a quarter inch thicker than most competitors!

We are proudly associated with: